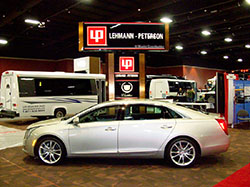 Celebrating it's 30th year in 2014, the International LCT Show is the biggest convention for limousine, charter and tour operators in the world. The 2014 was hosted in Las Vegas at the MGM Grand Hotel. The LCT show is attended by operators around the globe seeking education, product showcases and peer-to-peer networking.

Similar to past years, the 2014 show boasted a sold-out exhibit hall, enthusiastic networking events, and packed educational sessions. Many industry professional agree that the 2014 International LCT Show exceeded expectations for all who attended!

Lehmann-Peterson looks forward to the 2015 International LCT Show which will be hosted at the Venetian- Polazzo Resort Hotel and Casino in March of 2015.